Clothesline
Morning sun
Where there are two
The is only one

He says: Don’t believe in the choruses
‘cos they’re only words
before the second verse

He stands at the gates of eden, so he says
The only recompense
For ancient grievances

It’s the wonder I felt
Not the same as before
When I relied on the news
And the things that you told me
All the sounds, old and new
It’s the place in the night where I’d go

And the same way you said
How to use all the magic in the air
I dunno, it’s the way
That you told me to believe
In the things
The things that you know I can’t believe in

Are you picking up?
Are you receiving?
On the internet
On the ham set

What we had before, nobody can recall
How much we had to lose, how far we had to fall
The only thing that anybody knows
Is that whatever it was it isn’t here anymore

I wouldn’t ask so much as to change your point of view
I wouldn’t think so much if the story weren’t so skew
The times they never change, even when they seem so knew
Still stuck inside this head searching for the perfect view

A shelter from the storm, people line up two by two
But still my telephone call call anyone except for you
When the days are days at all, the nights I hobble through
The pictures on my wall, the only table set for two

There’s a prodigal son
At the bottom of a well
He’s reaching up for heaven
But his feet are balancing on hell
Tie the rope to my ankle, baby
Because I’m going down
And if I don’t make it back
Drop the rope and come on down

The people we lose fade away
The distance we stretch, it draws out every day
Seasons change the same way
I’d remember your name but I don’t remember your face

There’s never the time to make a change
The harder we push, the harder it is to remain
What was earned is spent in a day
Sometimes the moment we met was the moment we drifted away

A lot of people they’re all the same
Want to be hard but they’re tame
Lots to say but no real plans
For fame fortune or true romance
There’s always something else to blame
The world turning, a little wind or rain
Dreams chained to a pole in the ground
They’d rather sit than take the long walk round

The Ballad of Me and The Doctor

I went in to see the doctor
And he asked me all about my life and my work
He told me off for smoking cigarettes
And told me to take off my shirt
And then he told me about his son in university
And how his friends take too many drugs
“Well, I don’t know too much about that I said,”
“If you don’t know it’s there you don’t see too much.”

And he said I could call him a racist if I wanted to
I though to myself, “The picture is bigger than that”
But I didn’t say anything, I just
Nodded and smiled at him from where I sat

The Days of our Lives

The times we recall
Are the lines we remember
The strain of our lives
Is a long, distant thunder
And to take what it brings
Is to tie and to link
To lines that remain
To the dreams and the hunger

Outside,
Thunder is the sound
And if the rain does come
We can only hope but drown

Outside,
Thunder is the sound
And when the rain does come
We can only hope to drown

Top of the Hill

Talking to a Man

He was pulling in air like a baby being born
but the air here is heavy with the promises drawn
from billboards above and poisoned rivers below
so the words came out like a bells last toll, and he said

And I said, Man if you are going to talk to me
you might as well come back and sit down at my place

And he said man do you know that there are children being born
who will never understand their place in the world
but who’ll still always long for a place to call home
and some sort of heaven to aspire to.

And if there is something to believe in
it’s certainly not anything you can see and
if man is the image god
then he’s nothing but the product of his own imagination,

And if you go on from that then it must be true
that nothing that you can ever say or do
will ever mean anything to anyone anymore
when everyone you know here is gone.

I said, what can I say other than
that you might as well come back and sit down at my place.

A grain is an awful load
A truth in an empty show
A flame has a strength no stronger than a tree
The sky is the limit, sometimes you’ve got to let it be

Come into my world, where no-one stands next to me
The scriptures of my heart are nothing but chemistry
Come into my world where all understandings cease
The light upon my path, an image I cannot see 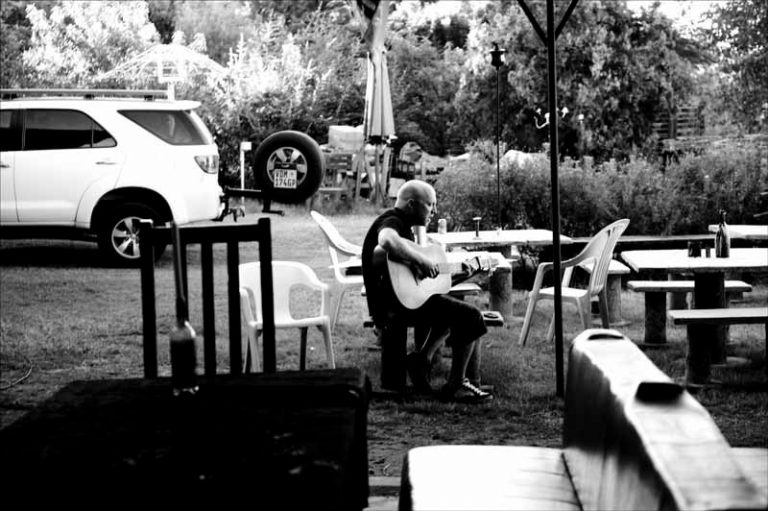 “A disarmed mix of tradition and the future…he brings his songs to the audience in a golden way.”